From Concept to Combat Boot 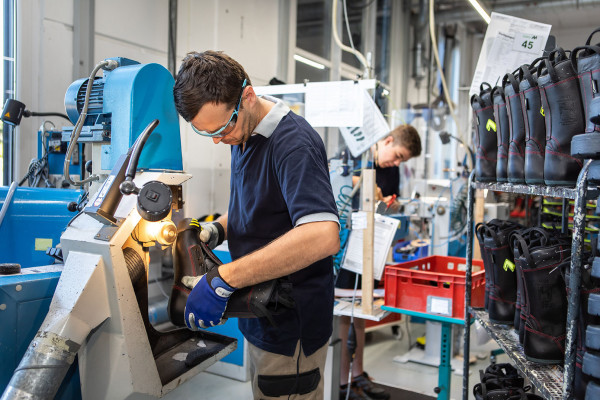 Team development instead of quiet tinkering

As with every HAIX boot, the development of a firefighter boot requires real teamwork: a collaboration between artisan shoemakers, design experts and quality specialists in an intensive exchange across departments. And the shoe can only meet HAIX's high standards when these work meticulously with the production, sales and marketing departments as well.

More than 25 years ago, HAIX celebrated its trade fair debut at the Interschutz 1994 in Hanover, with its first, still very manageable, stand. Four employees presented the HAIX FIRE FIGHTER boot on a self-built exhibition area.&nbsp

Whether they’re in Germany, Austria, the USA or Japan – HAIX tactical boots are exposed to extreme situations every day. Inspiration therefore also comes from the wearers themselves, as their feedback flows into development via sales and marketing.

From specification to series production

A so-called ‘requirements specification’ defines what area the new development should be for, what the shoe has to be able to do, which technical requirements have to be fulfilled, and much more. The concept for the boot builds on this before ultimately being given an appealing design. At first, the developers start with simple hand drawings. This is then used to create a prototype – often initially only of individual parts such as the sole. The first prototypes are usually a mixture of literal shoemaking and computer-designed parts using CAD. They are put through their paces to see if all requirements are met, and improvements are made on an ongoing basis. After final approval, the first samples are produced, and then the final production of a new firefighter boot begins.

The DIN standard for firefighter boots places high demands on every component. The goal at HAIX is always to exceed these. Every component on a firefighter boot must survive ten seconds of flame treatment without damage or burning. HAIX continuously tests materials in its own laboratory during the development phase. "This has the advantage that at the end of the development phase we don't have to start from scratch again because one part hasn't passed the test," says Andreas Himmelreich, Head of Research & Development at HAIX. In the so-called ‘sand bath test’, the protective insulation inside the shoe is tested. A real endurance test: firefighter boots must be able to withstand 250°C for 40 minutes without the sole deforming, and after 10 minutes the temperature inside the boot must not exceed 42°C. In an emergency, firefighters can usually be inside for up to 30 minutes until their breathing apparatus runs out of air. The standard differs in some instances for overseas use.

When it comes to design, HAIX follows the philosophy of ‘nothing without function’ – which means every detail not only sets high standards visually, but also has a purpose. The additional yellow elements on the firefighter boots , for example, make fellow crew members more visible in smoky buildings.

The right firefighter boot for every scenario

Firefighters want boots that go beyond the standard’s requirements and are as comfortable as possible. After all, the entire equipment can weigh almost 40 kilograms in use. Some scenarios require boots with additional cut protection. There is no universal ‘perfect firefighter boot’ (yet) – essentially, the boot has to be right for the individual wearer. HAIX chief developer Andreas Himmelreich explains the basic differences: "Some firefighters prefer quick, simple slip-on boots. The lace/zip fastener system on our FIRE FLASH series is still a bestseller. But the fast-lacing system on the FIRE EAGLE and FIRE HERO boots is very popular too, because it adapts perfectly to each foot and closes snugly with one pull. Many firefighters are on the move so much that what counts most is a light weight, which is what the FIRE EAGLE series offers. And if you're looking for a sturdy boot that you can rely on in any scenario, our FIRE HERO is a good choice."

It can take at least two years, including test phases, to develop a new firefighter boot from the last to the sole and the upper. Particularly innovative functional elements are sometimes worked on and optimised for longer until they are ready for series production.