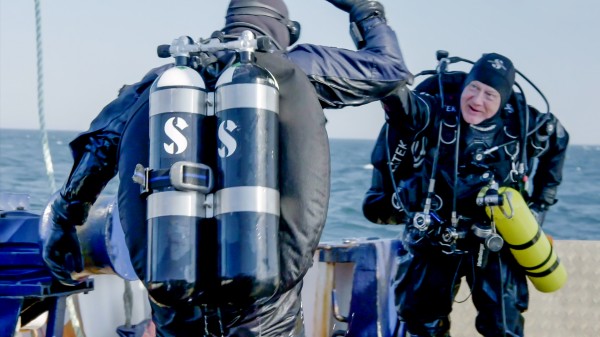 Freak weather conditions, rough seas and tidal conditions present a real challenge, even for professionals. 50,000 sunken ships, is a figure which speaks for itself with regard to the dangers faced by seafarers in the North Sea. During their recent expeditions, the Wreck Divers have chalked up two successes – an ancient freight vessel and a submarine that is yet to be identified. All German submarines missing in the North Sea have been registered, and their locations are known. One of the discoveries made by the wreck divers may turn out to be something of a sensation.

More than 50,000 wrecked ships lie in the North Sea. According to figures supplied by the official Lloyd‘s Ship Register in England, this area has one of the largest numbers of sunken ships in the world. It is also one of the world’s most dangerous stretches of water. Unpredictable currents and tides, poor visibility and rough sea all bring their risks. The North Sea is best left to the professionals. Andi Peters is an experienced North Sea diver with over 4,000 descents. 400 of these were in the North Sea. This is a body of water which contains all manner of things – medieval sailing ships, sunken war ships, all kinds of transport and passenger vessels, aeroplanes, fishing smacks and small and large sports boats. Andi Peters and his crew are searching for these secret treasures and for the stories that lie behind them. Shortly to be featured on the German TV channel D-MAX.

New discovery – a British submarine in the North Sea During the diving expeditions filmed for the latest series (which will be shown on the German channel D-MAX from October 2017), the Wreck Divers attempted to track down a missing submarine. They located HMS STARFISH, a British vessel which was sunk on 9 January 1940, 35 metres down and 60 nautical miles NW of Helgoland. “This was a sensational find for us,” says Andi Peters. HMS STARFISH was actually sunk by its own crew, and the wreck is well preserved. Not content with the spectacular images he was able to obtain, Peters now also wishes to make a documentary on the historical background. The STARFISH was one of three submarines to be sunk in the German Bight in January 1940. The British Navy ceased operations in the area as a consequence.

Next project – the Dogger Bank The Dogger Bank is a large sandbank located in the North Sea. 350 kilometres long and 120 kilometres wide, it extends over an area of approximately 18,000 square kilometres and is an area of the sea that has been the object of many tales, legends and myths. During times of war, it has provided the setting for a number of spectacular naval battles. “After two years of planning, we are now going down to the seabed to explore history further,” says Andi Peters. “Our targets include the SMS BLÜCHER, a large German battleship from the First World War, and two submarines which have not yet been identified. This area also has about 40 other wrecks, which we aim to subject to closer technical investigation. We will also make exploratory dives in some cases. The Dogger Bank project is indeed a highly promising mission.

Seeking new adventures in a mini-submarine

Andi Peters has dreamed of owning his own submarine since early childhood. When the option became available, it was inevitable that a deal would be struck. The benefit of using a submarine is that it enables Andi Peters to stay underwater for significantly longer periods. Whereas a diver can only stay at a depth of 30 metres for 30 minutes, the submarine allows the wreck seekers to achieve submersion times of about three to four hours. This opens up completely new prospects with regard to investigating wrecks on the bed of the North Sea.

“Diving in the Mediterranean is like listening to soft rock,” says Andi Peters. “The North Sea is AC/DC.”

Nevertheless, Andi was anxious to seek out a quiet location for initial testing of his new underwater vessel. He and the submarine need to act as one unit if everything is to go well on the high seas. For this reason, the whole crew is present. Diving today is taking place at a former open-cast chalk mine 40 kilometres outside Cuxhaven. Now completely flooded, the mine is a true Eldorado for divers and diving schools. An old aeroplane wreck lies 25 metres down, whilst the old mining installations remain in place under the water. This is the ideal environment for Andi Peters as he undertakes the first trials of his submarine. Steering and manoeuvring require a great deal of practice. Even getting into the vessel is a considerable acrobatic feat in itself. This is no place for anyone who suffers from even slight claustrophobia. In fact, the Guinness Book of Records states that this is the smallest known submarine anywhere in the world. According to its builder, anyone taller than 5 feet nine or heavier than 155 pounds is likely to experience difficulties.

During his first dive in the lake Peters shoots out of the water like a torpedo. He has been forced to perform an emergency ascent because of a CO2 alarm. One of the valves was not correctly adjusted. This is a boat which requires a highly precise approach, but such things are all part of the daily work of the North Sea divers. The mini-submarine is a lemonyellow one-man torpedo which bears the HAIX logo in blue on its outer shell. It has been designed to facilitate dives of up to three hours in length. It will be exciting to see which treasures the wreck divers are able to bring to the surface when they move onto the North Sea.

However, a submarine requires considerable maintenance and care. When a complete overhaul was undertaken. The process lasted for twelve weeks. Technical details were improved, and the whole of the hull was re-varnished in a striking citrus yellow designed to resemble the BLACK EAGLE Adventure, a well-known product manufactured by the sponsor HAIX. The choice of such a colour also takes an important safety aspect into account. In the event of an accident, the submarine will be much easier to identify on the seabed. The mini-submarine also bears the HAIX logo, and this provides a real eye catcher when the vessel is put on its trailer to be transported via motorway to test locations and promotional events.