Step by step on the trail to recovery 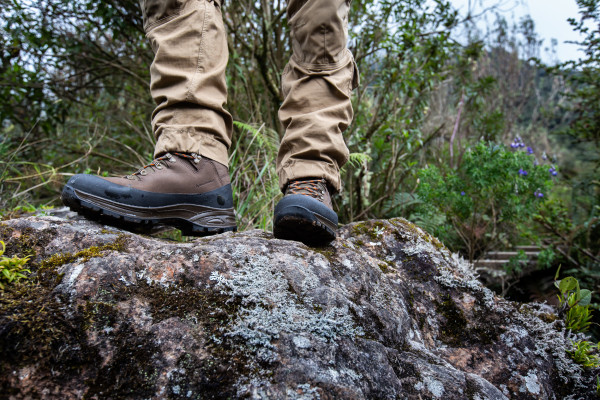 When he left the UK Armed Forces, Dan Tabor found himself having problems returning to life outside of the Army. Struggling with a decrease in physical fitness and issues with mental health, he decided to combat both by hitting the nature trail.

Why did you start hill walking?

I left the military after serving for nine years (four years in the Army Reserves and five years in the Royal Tank Regiment), but I struggled adjusting to civilian life. Slowly I began developing symptoms of anxiety and depression.

I was issued anti-depressants by a doctor, which I took for six months, and began doing much better, but in the long run they didn't help. I put on a lot of weight and lost all motivation, I stopped training and really struggled with day-to-day life.

After coming of the tablets, I started counselling and was advised to start exercising again, as that helped in the past. So, I started walking a lot as a way to reduce stress and combat my anxiety.

What motivated you to get out on the trail?

Being an ex-soldier, I was used to long walks with kit (which we called 'Tabbing') and loved the feeling of being outdoors and away from civilisation.

What's been the biggest benefit of walking for you?

Just the feeling of being in nature at its rawest. There are some fantastic places to walk in the UK, and I've also found some great routes abroad so I've been able to keep up my walking even while not at home. It's great for your mental wellbeing to forget about the hustle and bustle and stresses of modern live.

What parts of modern living do you think affect mental health? And how can it be confronted?

It's good that it is being spoken about more now. Social media coupled with a hectic lifestyle, which is now commonplace, doesn't help. Personally, I belive it's down to people not getting out from their comfort zone, not talking or socialising with people. We need to 'defrag' and I belive any form of fitness is a great way to start.

Some people can be put off walking by bad weather - has this ever affected you?

Weather has never been an issue for me. I've served on operational tours and exercises in Iraq, Canada, America and Germany, and as they say in the Army - 'If it ain't raining, you're not training'! Don't let weather stop you being outside and enjoying nature.

What's been the biggest walking challenge you've taken on so far?

I've mostly walked routes along Dover cliffs as they're local to me. Ialso walk along a trail in Ashford (Kent, UK) which I used to do before I joined the army to help me improve my  fitness. I would like to get a dog in the future as a companion, but also as motivation for doing more walking.

How did you first find out about HAIX footwear?

I first heard about HAIX from friends who are still serving and use HAIX boots regularly. I also read a lot of articles and reviews from people really praising the quality of HAIX boots.

What features of the boots were you most impressed by?

I was impressed with how well made the boots are compared to ones I owned in the military, especially as they cost the same price.

The ankle support is also fantastic. The comfort offered by the Vibram footbed and the cushioning, even when scrambling over rocks, was amazing, and I really like the fast lace system.

The boots have had six months of weekly use, especially during the winter months, and they still look like new and are extremely easy to clean and maintain. They're also really breathable, and I didn't suffer with any dampness or blisters, which I've struggled with when wearing other boots.

How have the boots helped you on your recovery journey?

The boots have been fantastic. Before I was using trainers, which restricted me, especially in the winter when I wanted to get out and put some miles in walking the cliffs and trails. Trainers don't offer the right kind of protection from the elements, like waterproofing or thermal insulation, and aren't tough enough to last long on rough terrain.

What advice would you give to people in a similar position that want to be more active?

I'd say, you need to want to train and to train for yourself, not to please other people. Just getting out, starting off small at first, will make you feel so much better. I never thought I would get back into the gym, but getting out in the nature and walking is a great way to start. I now train several times a week at the gym and am getting into powerlifting, something that a year ago I never imagined I'd be doing.

What walking challenges do you want to take on in the future?

I'd like to go back to Wales again and visit Brecon Beacons (a mountain range in South Wales). It's an amazing place, and the views and the feeling of being away from everything in life is fantastic.

A few other places I'd like to tackle in the future include Hadrian's Wall and some Fell Walks. I read books by Alfred Wainwright, a British Fell Walker, and some of the walks he speaks about are on my 'bucket list'.