Pushing to the limit - Adam Collins walks the Hadrian's Wall 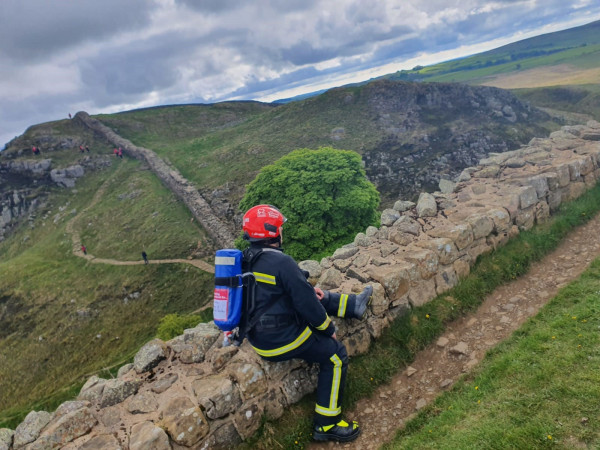 Part of the spirit of firefighting is to take on any challenge, no matter how large. Adam Collins saw one such challenge and decided to make it even more difficult! Not only would he walk an 18-mile stretch of Hadrian’s Wall on the England/Scotland border, he would do it in full firefighter kit. We spoke to him about his motivation, preparation, and how, by donating him a pair of Fire Eagle boots, HAIX helped him every step of the way.

Of the 400 people who started the trek, one quarter had dropped out by the end – what gave you the strength to make it to the finish line wearing full firefighter kit?

What really gave me strength was the support I’ve received. I’ve raised over £2,000 for the British Heart Foundation and the British Firefighter’s Charity through the kind donations people have given me. Some companies also supplied me with equipment so I could complete the challenge in the way I wanted; in full firefighting kit. So that gave me the strength, everyone who believed in me and what I was doing, and the charities I was doing it for.

Why did you decide to undertake the Hadrian’s Wall walk supporting these particular charities?

I have experienced, first-hand, the fantastic work done by the Fire Fighters Charity. An injury at work left me with a ruptured bicep tendon and the Charity helped me with a rehabilitation programme.  Without it, I wouldn’t have recovered as well as I did. The British Heart Foundation is a charity that funds research into finding cures and treatment for heart disease. My brother suffered a heart attack when he was in his early thirties, so when I saw that the Charity was running this event, I thought it would be a great way to raise money and support the Charity in helping others.

Can you tell us about your training regime in the run up to the challenge?

I was trying to train as much as possible. I was very cautious that I didn’t want to injure myself, so I did pace myself. I started by doing two or three miles of hiking at least once every two days. After a month I was going out doing longer walks, working up to hikes of around 10 miles. I trained for six months in total.

I went up Roseberry Topping with the breathing apparatus on, I did a 10-mile hike where one section was hiking up Penhill [a large hill in the Pennines region of Yorkshire, UK], and another 10-mile circuit of Cleveland Walk [a long distance walking route across the Yorkshire moors]. There wasn't a week where I didn’t do any training. I knew it was going to be hard, so I had to prepare myself for it.

What made you decide to do it in full firefighting kit?

As an ex-firefighter, I know how challenging it is to wear all of the equipment and to do an 18-mile hike in it. With the terrain of Hadrian's Wall, it made a difficult event even more difficult. I liked the thought of really having to push myself to complete the challenge and knew it would help raise more awareness, and money, for both charities.

How did you come to partner with HAIX for the challenge?

I did originally plan to do the hike in full fire kit and walking boots, but when HAIX approached me to offer me support I was overwhelmed. After researching their products, I took them up on their offer to donate a pair of boots for me to wear throughout training and the event itself. I cannot believe how comfortable they were! I would even say they were better than my walking boots. I didn't have any issues with rubbing so blisters were minimal, the ankle support was great, and they handled the tough terrain extremely well. I would never have thought I was wearing fire boots, they were more like comfortable walking boots.

What parts of your kit were particularly challenging for you during the route?

The kit that gave me a challenge included my gloves, as they kept a lot of heat in my hands - I removed them after about two miles as they were becoming an issue for me. Although my helmet was one of the most comfortable I have ever worn, again it kept the heat in and increased my internal temperature. The best thing was definitely the HAIX boots! They were so comfortable, even at 18 miles, and very durable. My feet didn't sweat at all.

What was the first thing you did when you finished the course?

The first thing I did after completing the course was to take all the kit off and lie on the floor and have a rest. I was so happy to have the weight off my shoulders and to be able to feel cool air again. The next day I just spent recovering.

Do you have any other fundraising challenges lined up for the future?

At this moment in time no, but I’m sure I’ll do another fundraising event. I’m not sure exactly what yet, but I’ll come up with something.

For more information on the challenge and the British Firefighters Charity, visit their website.