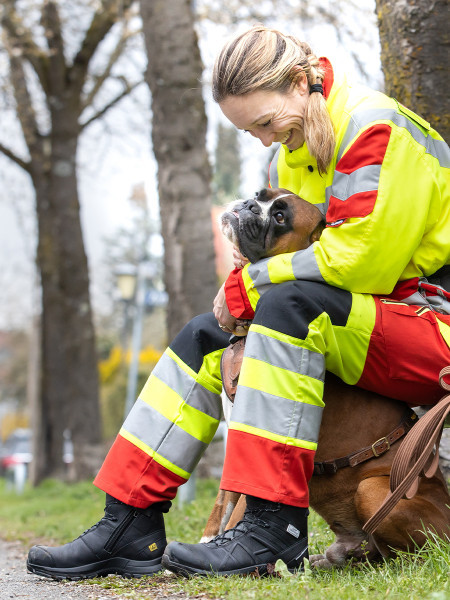 A huge, 600-horsepower clown" – that's how Christine Theiss describes her three-year-old boxer dog Hermes. "He has the energy of five dogs, but he is also crazily competitive and focused.” And he puts that to perfect use in ‘mantrailing’.

Mantrailing is the canine ability to follow a specific scent trail for miles. The search and rescue dogs with this special training are called mantrailers. Behind every mantrailer is its dog handler. Because rescue work only functions as a team.

Christine and Hermes, for example, are one of the volunteer teams in the Arbeiter-Samariter-Bunds (Workers' Samaritan Federation) rescue squad in Munich. It all started over twelve years ago when Christine noticed that her boxer dog was "just too smart to sit around". "I was a competitive athlete myself at the time. In my free time, I wanted to switch off from competing and train with my dog. That's how I came to volunteer with rescue dogs." In the meantime, Christine has not only become a dog handler and trainer, but also the deputy federal chairperson of the ASB.

Based on her many years of experience, she knows the foundation for search work is motivation. "Why would my dog search for me at three in the morning if it’s not fun for him?" she explains. That is why professional mantrailing depends, among other things, on the breed. Rescue dogs must have a good temperament and be easily motivated. "A headstrong boxer is particularly suitable for this, as long as it is well-bred, i.e. healthy," says Theiss. That’s because the dog’s nose in particular has to work at full speed during mantrailing. The mental workout is exhausting; Christine even tires Hermes out with it: "My dog always has energy, but after mantrailing he falls straight to sleep."

Besides motivation, enjoyment is the most important thing in the two-year training. And that comes from rewards: food, petting or playing – every dog has its personal preference when it comes to treats. Dogs send out various other signals with their body language; the handler must be able to read these when mantrailing. This creates a very close connection, which Christine and Hermes also share. "I know that he would die for me without question," she says, describing their heartfelt relationship. The dog owner also needs some important qualities for this, namely time, team spirit, critical faculties and self-confidence. "If someone runs behind without self-confidence or a strong posture, the dog also becomes unclear in its body language and you can hardly read it," says Theiss. The lead handling is especially crucial: the dog and human communicate with each other via the tautly held leash and the individually adjusted harness.

What should Christine never go on a trail without? A water bottle, bandages, GPS and of course the odour sample. Her personal safety equipment includes ankle-high safety shoes: "I recommend everyone always goes out in S3 shoes. After all, I need to be able to concentrate on my dog, not the path." Despite her commitment, her own health comes first. Just as Christine blindly trusts her Hermes, she also needs to rely on her footwear completely: "I've been wearing HAIX boots for my work with the rescue dog team for years.” Because no matter whether it's an urban jungle or forest and meadow terrain: each search situation is different. With the HAIX RESCUE One, the new tactical boot for rescue forces, Christine is equipped for any situation thanks to its non-slip sole, toe cap and puncture protection. A GORE CROSSTECH membrane not only makes the shoe waterproof, but also prevents the penetration of blood and body fluids – especially important for rescue workers who work with injured people. This way Christine can fully concentrate on the search work with Hermes.

Only once the mission is completed will she think about which way she wants to go. Then, as soon as Hermes has had a good night's sleep, they’ll be off for a long walk.

BUNDLE
Rescue One
Safe on the road with Rescue One: Your practical companion in the rescue service.
174.90 GBP £174.90

Rescue One Ws
Safe on the road with Rescue One: Your practical companion in the rescue service.
174.90 GBP £174.90