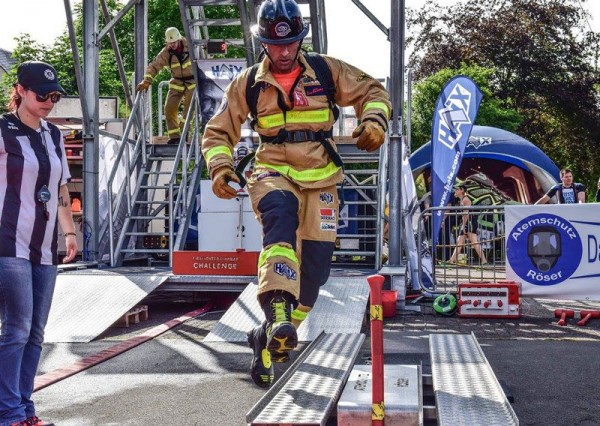 For many years, the Fire Fighter Combat Challenges (FCC) staged in Europe used only simple and shaky scaffolding constructions. At the 1st Mosel FCC in 2014, HAIX began its sponsorship of a new and solid steel tower. The project was realised by an organising team led by Gerd Müller and Christian und Daniela Follmann. Since this time, the HAIX TOWER has been the most familiar structure on the sporting fire fighter scene. The tower is over 12 metres high and has three storeys (six if the levels are offset). It weighs around 20 tonnes and is in use in Germany, Belgium, Austria and Slovenia. Fixing takes place on an area measuring 10 metres by 10 metres using four anchoring points each able to bear 7.5 tonnes. The tower is accompanied on its travels by the HAIX Tower Crew, which coordinates and implements transport and erection. At this point, let us give them a generous round of applause.

The Fire Fighter Combat Challenge has its origins in the USA. The event involves a simulated deployment which takes in every aspect of fire fighting from beginning to end, from setting up the hose on site to rescuing persons in danger. Competitors are required to wear full fire fighting gear throughout, including integrated compressed air breathing apparatus. This means that the total weight of equipment exceeds 30 kilos. The whole competition task needs to be completed in a single go and is therefore quite justifiably referred to as

„The Toughest Two Minutes in Sport“

Team and relay event also take place alongside individual competitions. The world record of 1 minute 16.83 seconds was set by Justin Couperus from the Hamilton Fire Department at the World Championships in Alabama in 2015.

The six stages of the competition