HAIX Desert Boots - Tested in a desert in Oman 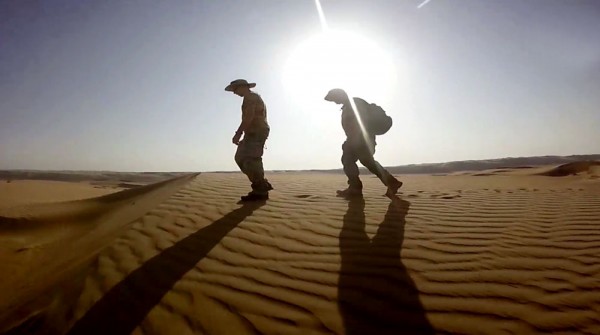 An endurance test for shoe development

Sand, rocks and searing sun. 42 degrees celsius in the shade, if indeed any such relief can be found. But even under such extreme conditions, HAIX shoes need to offer protection and comfort for the feet. And what better way of evaluating this could there be than to launch our own extreme endurance test? After all, our motto does not merely apply to specialist boots.

We seek to align our shoe development as close to reality as possible.

HAIX’s shoe developers had joined forces with the membrane supplier Gore to investigate the following question. Can a boot which features watertight membrane technology deliver a comparable feel good foot climate performance to a boot with high air and water permeability, even under such extreme conditions? Christian Landegger, Sven Seliger and Martin Pfister (the latter two are both from Gore) made up the testing team. Wearing temperature sensors on their feet and equipped with the robust HAIX Nepal Pro (with Gore membrane) and with the Black Eagle Athletic Desert Mid (without membrane), the three men faced their challenge.  The area of deployment was a desert in Oman.

Temperatures were 42°C in the shade and 58°C in the sun. The sand temperature was 60°C.

Such extreme conditions produce a maximum of sweating. “The body effectively enters survival mode,” said Christian Landegger, HAIX’s experienced Head of Sales. “A shoe needs to fulfill its basic function as a shoe in order to avoid pressure points or blisters.” Experience also tells us that mid-height shoes are only suitable to a very limited extent for “genuine desert deployments on foot”. It is also essential that the upper material is impervious to sand. One small detail produced a significant effect. The rear pull-on strap was a positive factor because of the ease of getting in and out of the shoe. Sand scattering was low in this case. However, the team of testers also arrived at a surprising result: “There was no discernible difference between Gore and non-Gore.” The small differences in the measurements recorded confirmed this subjective feeling. The Gore and non-Gore models also showed similarities in terms of drying. Outsole stability proved a benefit in both cases. The conclusion was that both shoes produced absolutely no problems at all. However, the superior grip offered by the sole of the Nepal Pro was impressive when it came to “getting out of the water”. It also provided unbelievably good grip across rocks, something which had already been noted by rescue teams working in the Masca Gorge on Tenerife. Despite the tendency of soldiers from special units to forgo high-end membrane technology when deployed in the desert, the feeling of foot comfort proved to be higher in the case of the membrane models.